Sometimes I, like Mickey Mouse, could use a Handy Helper.  You know, an extra set of hands to help with my two littles.   All I'd have to say is "OH HANDY HELLPPEERR" and BOOM, just what I need is right in front of me.  Heck, I'd even settle for toodles.
My handy helper would have to know how to potty train and have a boob though.

Whew, folks it's been rough around here.  Daddy left, which is always hard, dude decided he HATED his bed, and noon had an ear infection.  All that drama = NO SLEEP.  For. a. solid. week.  The bags under my eyes had bags under them.  Seriously, it looked like someone sucker punched me in both eyes.

I don't realize how freakin awesome of a dad Rudy is until he leaves.  There is a void in so many areas when he is gone.  Really, too many to list, but the main void is with dude.  They are best buds and thrive off each other.  When Rudy is home, he puts dude to bed every night and gets up with him most mornings.  Well when he left, dude cried for three nights in a row at bedtime.  I'm talking big ole crocodile tears.  It was an hour long fight of rocking, singing, and laying down.  Wash, rinse, repeat.  All the while, sister is screaming because she's ready to go to bed.  However, I can't put her down until dude goes, because their rooms are beside each other and he will keep her up.  Oh my word, it was BAD.  We went to Papaw and Grammy's for the weekend & he had no problems sleeping there.  That got me thinking, maybe he was acting out because Rudy wasn't putting him to bed.  Well, since we've been back home, he hasn't cried one bit at bedtime and goes right to sleep!  He missed his daddy and bedtime was their thing and I think it was just too much for him.  He had to get used to daddy being gone.  Sometimes I forget that I'm not the only one who misses daddy terribly.

Moving onto my sweet girl.  The night before Rudy left, she woke up a few times throughout the night.  I thought, well maybe her tummy is bothering her.  The next night, she woke up even more.  I thought, well she's gnawing on her hands a lot, I bet she's teething.  Every parent plays the guessing game when things go awry, haha.  The next few nights were restless and she woke up every 1-2 hours to nurse for comfort.  (hence, why my handy helper would need a boob)  We were both exhausted.  Thank goodness family stepped in to help during the day!  On Sunday, I had ENOUGH and took my girl to the after hours clinic.  The doc said she had an ear infection in her right ear and fluid on the left.    I knew it was an ear infection.  Dude was around the same age when his sleep got terrible because of ear problems.   To be honest, I was kind of glad it was her ears because there was something I could do to help. Antibiotics, ear drops, and tylenol did the trick and we've had 2 night of sleep.  Thank Jesus!

Life can be so hard with two small children.  However, the hard times don't compare to the awesome times.  Being a parent is absolutely incredible.  You love deeper, laugh louder, and cry harder than you ever thought you could. 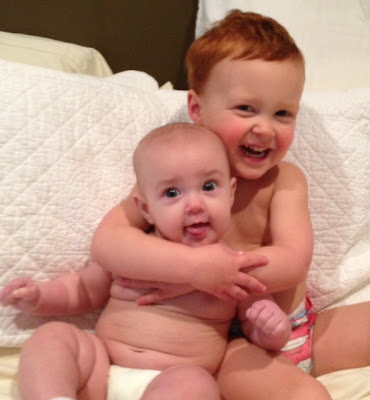 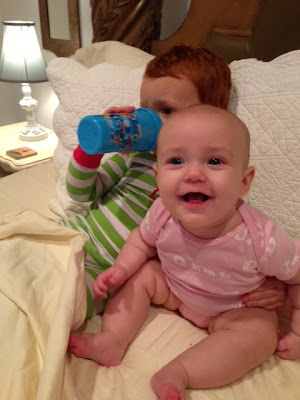 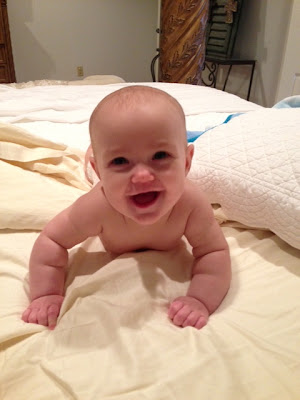 They are my gifts and I try to treasure every moment with them.
Here's a funny story to end this dramatic post:)
Dude's been known to rummage through our drawers and today he found this. 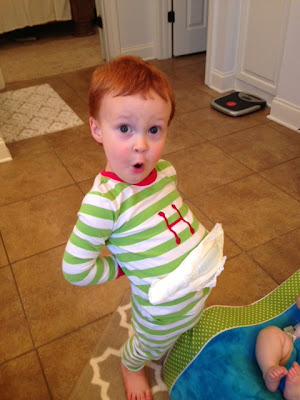 HAHAHAHA.  He said "airplane".  Yes, dude it does have wings, but I can assure you that is most definitely NOT an airplane.  How funny is he?
Thanks for reading!
at 8:07 PM