Our First Week with Annie & Dude...

It has been one week since Annie June made her arrival and a lot of things have changed around the Allen house.  I can't believe my little squirrel baby (that's her nickname as of now) is already one week old!

First and foremost, I have to give a HUGE shout out to my dude.  Other than temporarily losing his mind and throwing a thermometer at sister, he has been an utter joy & great big brother.  We make sure to love on him first and then on Annie.  Sorry sister, but you really don't know the difference as of now:)  I rock and sing to him for a few minutes before nap & bedtime.  Most of the time, we take a bath together & he makes me laugh the entire time!  Speaking of laughing, the other day I busted him with his shirt up trying to pump milk with my breast shield, haha!!  I literally ran to get my phone to take a picture, but couldn't find it fast enough.  Last night, as sister was nursing, Hagan started sucking on her head.  It was so funny!  He will mock her cries and grunts, so I guess he just imitated her sucking and latched right on to her head, haha.  That kid has the best sense of humor!  It's the little moments like those that I never want to forget and makes me so happy that I take the time to blog:)  He gets a little stir crazy, so he has thoroughly enjoyed all the company that has been coming to the house.  And on top of being a comedian and pure joy, he is sleeping all night in his toddler bed!  Way to go Dude!  We love you buddy...

Moving on to my sweet little squirrel.  If she were any sweeter, sugar would drip right off of her!  She is unbelievably strong & has the longest feet & toes!  She smiles all the time & rarely cries.  I know that we are in the "honeymoon stage" and she will get more vocal as she starts to wake up, so I'm trying to soak up every ounce of her sweetness!  I'm definitely enjoying her more at this stage than dude, just because I'm not a nervous wreck.  With your first child, you are so unsure of everything and you feel like the weight of the world is on your shoulders.  At least that's the way I felt, but it's so not the case with your second!  She eats every 2-3 hours during the day and mostly 3 hours during the night.  She has never had a problem latching on since birth, hallelujah!  Every night, she has a big bowel movement and seems a bit squirmier.  She is dead to the world when she sleeps during the day, but moves constantly at night!  Yep, that sounds like an Allen child!  Oh and y'all, I can tell she is getting chunky already:)

Rudy has been so great!  He was not excited about having a little girl, but he is totally obsessed with her.  He's still not too keen on changing her though.  Since he can't feed her & doesn't like to change her, he mostly takes care of dude.  The first 3 nights, I had Annie by myself at night.  I felt like it was crazy for the both of us to have to wake up all night long!  HA.  It took one night of waking every 2 hours and feeding for an hour to change that!  So now, I nurse her around nine and we top her off with a breast milk bottle & when she wakes up, I take her to the spare bedroom and we sleep & nurse until we wake up!   That schedule seems to work for us right now.  She mostly sleeps in her swing at night and loves the sound of a hair dryer.  It pretty much puts us all to sleep every night!

It's my turn.  Yesterday, was the first day that I have felt back to my normal self.  I felt well rested, I got out of the house for an hour, and had no cramps whatsoever.  I have officially lost all baby weight that was gained this pregnancy.  Before you get all pissy with me, I have lots of flab and more weight to lose!  I started this pregnancy around 20 pounds heavier than I wanted to, so I have 20 pounds to lose.  You happier now?  The only bad thing that I've had to deal with is two terrible tension headaches.  When I say bad, they were awful.  The first one hit me like a ton of bricks Friday night.  It hurt so bad, that I literally thought I had a brain aneurysm and I prayed to God to take care of my children & husband.  I really thought death was near.  Thank goodness I had my Percocet prescription filled from the hospital and 2 pills did the trick.  Last night, I got another one!  It wasn't quite as crippling, but it hurt enough to have to take 2 pain pills.  I've researched the subject and decided that it is a combination of stress, sleep deprivation, maybe a little dehydration, anesthesia from the epidural, and lack of caffeine and proper nutrition.  I realized that I didn't eat supper last night, and that just can't happen.  I've got to take better care of myself!  Other than those darn headaches, I feel awesome and very blessed!  I'm still in bliss land for now:)

I think that catches you up on each of us!  We are taking it one day at a time and trying hard to savor every moment with our two precious children.  Also, thank you to everyone who brought gifts & food. We haven't had to prepare one meal so far and that has been absolutely wonderful!  Our family is so blessed to have such loving friends and family!  Thank you from the bottom of our hearts.
Here are some pictures of our first week together, most of them are instagram repeats:) 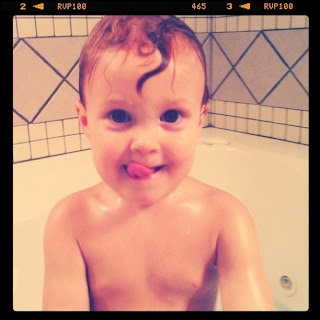 My big boy and his toddler bed! 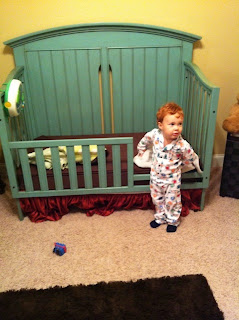 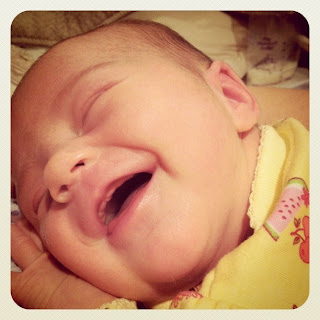 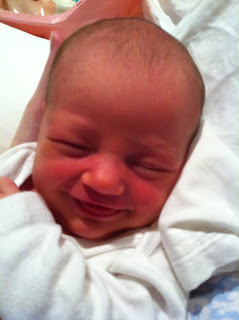 She likes to hold my hand while we nurse. 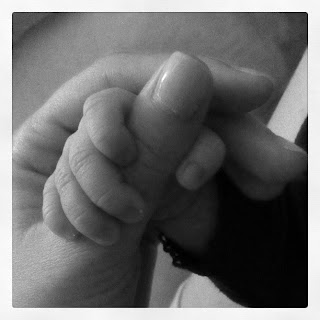 Enjoying an afternoon snack of cheese and bologna with my main dude! 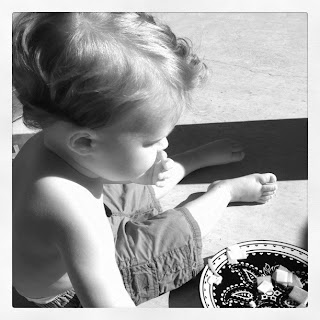 congrats on two beautiful babies!! Annie Noon is just precious and big brother is too cute!